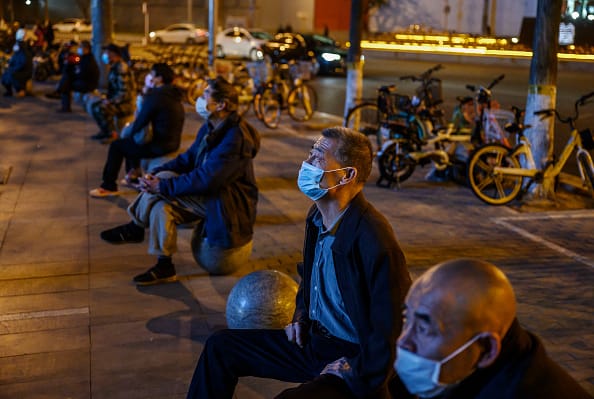 Chinese men wear protective masks as they watch the evening news on a screen outside a shopping mall on April 15, 2020 in Beijing, China.

China reported that its first quarter GDP contracted by 6.8% in 2020 from a year ago as the world’s second largest economy took a huge hit from the coronavirus outbreak, data from the National Bureau of Statistics of China showed.

The contraction in the first quarter would also be the first decline since at least 1992, when official quarterly GDP records started, according to Reuters.

Analysts polled by Reuters had predicted China’s GDP would shrink by 6.5% in the January to March quarter, compared to a year ago. The forecasts from 57 analysts polled ranged from a 28.9% contraction to a 4% expansion. China’s economy grew 6% in the previous quarter, from September to December 2019.

China’s first quarter GDP fell 9.8% as compared to the fourth quarter of 2019, data from the bureau showed.

The country is facing tremendous pressure amid increasing uncertainties and instabilities from the coronavirus outbreak, said the statistics bureau. The country is also facing new difficulties and challenges in resuming work and production.

The world’s second largest economy came to standstill earlier this year as Beijing implemented large-scale shutdowns and quarantines to limit human contact in order to contain the coronavirus outbreak.

In the first quarter, retail sales in China fell 19% from a year ago while industrial production fell 8.4% in the same period, data from the bureau showed.

The latest data comes after exports fell sharply in January and February compared to a year ago, and manufacturing activity plummeted.

China’s economy is beginning to come back online again, with work restarting in many companies, but it faces headwinds as the coronavirus spreads in the rest of the world and global demand is dented.

This is breaking news. Please check back for updates.