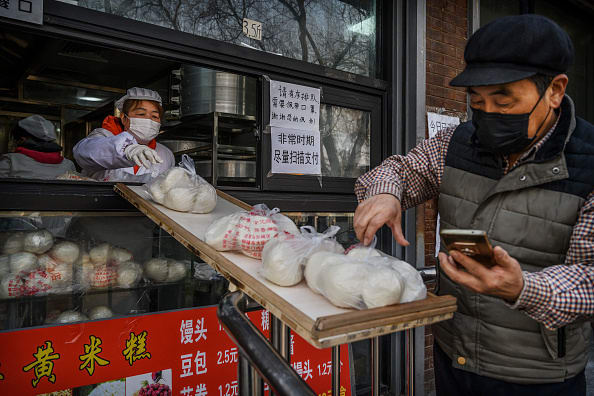 A Chinese woman slides steam buns down a ramp used to prevent touching and contact as the customer takes his order at a local take out on February 19, 2020 in Beijing, China.

BEIJING — While Chinese authorities try to control the spread of the new virus, they are moving quickly to stall its impact on the economy, especially on people’s jobs.

This past Tuesday, the powerful State Council decided at a meeting to waive some business’ contributions to social insurance plans through June, and emphasized that “stable employment” must be a priority.

These policy moves also come as the country begins a gradual return to work in manufacturing, technology and other major industries. The coronavirus that has killed more than 2,000 people began spreading rapidly in mainland China in January ahead of the Lunar New Year holiday and forced more than half of the country to shut down for at least a week longer than planned.

As of Thursday morning, about a third of 1,000 Chinese companies surveyed in the last week by research firm China Beige Book remain closed, and roughly another third are operating remotely.

Workforces are losing more laborers than hiring, and wages are on the verge of contracting, the research firm’s survey found, noting the trends were consistent regardless of industry or company size.

China’s Commerce Ministry said Friday that resumption of work in the country’s top exporting province of Guangdong has been “rapidly increasing,” while key businesses in foreign trade in provinces such as Zhejiang and Shandong have a resumption of work rate of around 70%.

But the ministry said Thursday it expected consumption will still be in a recovery period in the second quarter, indicating the scale of the virus’ impact on the economy even if the disease is curbed by March.

The high-level policy announcements come amid a flurry of local government policies to support privately run, smaller businesses, which account for the majority of jobs in China but operate in a state-dominated environment. One plan to reduce employers’ contributions to workers’ social security is expected to ease businesses’ burden by a total 500 billion yuan ($71 billion), officials said Thursday. That’s about one-fifth of the more than 2 trillion yuan in last year’s tax and fee cuts.

“The original intent of the country is very good, and we hope all levels of government will fully implement these relief measures, and not take discounts, in order to really alleviate some of the impact of this (virus) on medium, small and micro-sized enterprises,” a financial markets veteran in Beijing said, according to a CNBC translation. The individual asked not to be named due to the sensitivity of the issue.

”This (virus) has made it more difficult for private enterprises to survive (in an environment of widespread market and financing discrimination),” the source said, describing the situation faced by smaller firms as “hitting a tough point of life or death.” “If private companies fail in a large number of outbreaks, the domino effect on the job market is extremely obvious.”

Analysts have pointed out that the challenges to employment are greater now than during the SARS outbreak in 2003. Then, close to half of workers were in primary industries such as agriculture, while in 2018, 46% were in services, according to official data.

This time, the virus’ high level of contagion has prompted local governments to limit gatherings, resulting in empty or closed shopping malls and other service-heavy sectors. For their part, retailers are turning to online sales and delivery as a way to make up for the lack of crowded storefronts.

In a report this week, analysts at S&P Global China painted a grim picture for restaurant, tourism and media and entertainment businesses. They forecast restaurant sales in the first quarter will likely be half what they were during the same period last year.

Even if businesses aren’t laying off workers, many people may not be getting paid as much or at all right now.

To help employment, national-level officials at press conferences in Beijing in the last two weeks have announced a number of measures including increasing online recruitment, training subsidies and support for innovation-related industries. Government figures, which are frequently doubted, have reported an unemployment rate of near 5% or less for years.

Uncertainty weighs in the short term

The longer-term effect of the virus on the national economy is less certain. While Chinese news headlines are scattered with references to business losses in the hundreds of thousands of yuan or more, financial analysts generally say the fundamentals of the world’s second-largest economy remains intact.

For example, an increase in bank loans to struggling smaller businesses at this time will likely increase the level of non-performing loans in the financial system.

But if the virus comes under control around March and it’s business as usual in April, then the problem isn’t that great, especially since the direct impact is on services, not asset-heavy industries, pointed out Chen Xinyi, banking analyst at China Asset Management Company. She added that if the virus is under control by March, then the financing needs of manufacturing companies aren’t that great.

Commercial real estate services company JLL also expects demand for office space in China to be healthy over the next several years, Daniel Yao, head of research, JLL China, said in a phone interview on Thursday.

For now, he said, there’s a clear decline in market vitality, with a drop in property visits, contract signings and construction, and the uncertain environment is causing companies to be more conservative.

Overview of China’s return to work

Here’s a summary of some reports on resumption of work around the country:

Beijing — City officials said that as of 6 p.m. on Wednesday, large software and information services companies have a resumption of work rate of 86.9%, with many employees working remotely.

The capital city’s industrial companies with annual revenue of at least 20 million yuan from their primary business operations have resumed work at a rate of 61.2%.

Guangdong, Jiangsu and Shanghai — Industrial companies of the same size or greater in these regions have a return to work rate that has topped 50%, according to an official for China’s economic planning body during a press conference on Wednesday.

Shandong, Zhejiang — Key businesses in foreign trade have a resumption of work rate of around 70%, the Commerce Ministry said Friday.

Shanghai, Shandong, Hunan — The rate of resumption of work has topped 80% for foreign-invested enterprises in these regions, the Commerce Ministry said Friday.

Return of laborers — The cumulative return rate of workers to 15 cities across China is about one-fourth of what it was during the corresponding post-holiday period last year, according to Nomura’s analysis of data from Baidu.

Power use — Daily power coal consumption of the six major power generation groups rose 7% from a week ago, with a volume at 58% of what it was prior to the Lunar New Year holiday, Morgan Stanley analysts said in a note Friday.