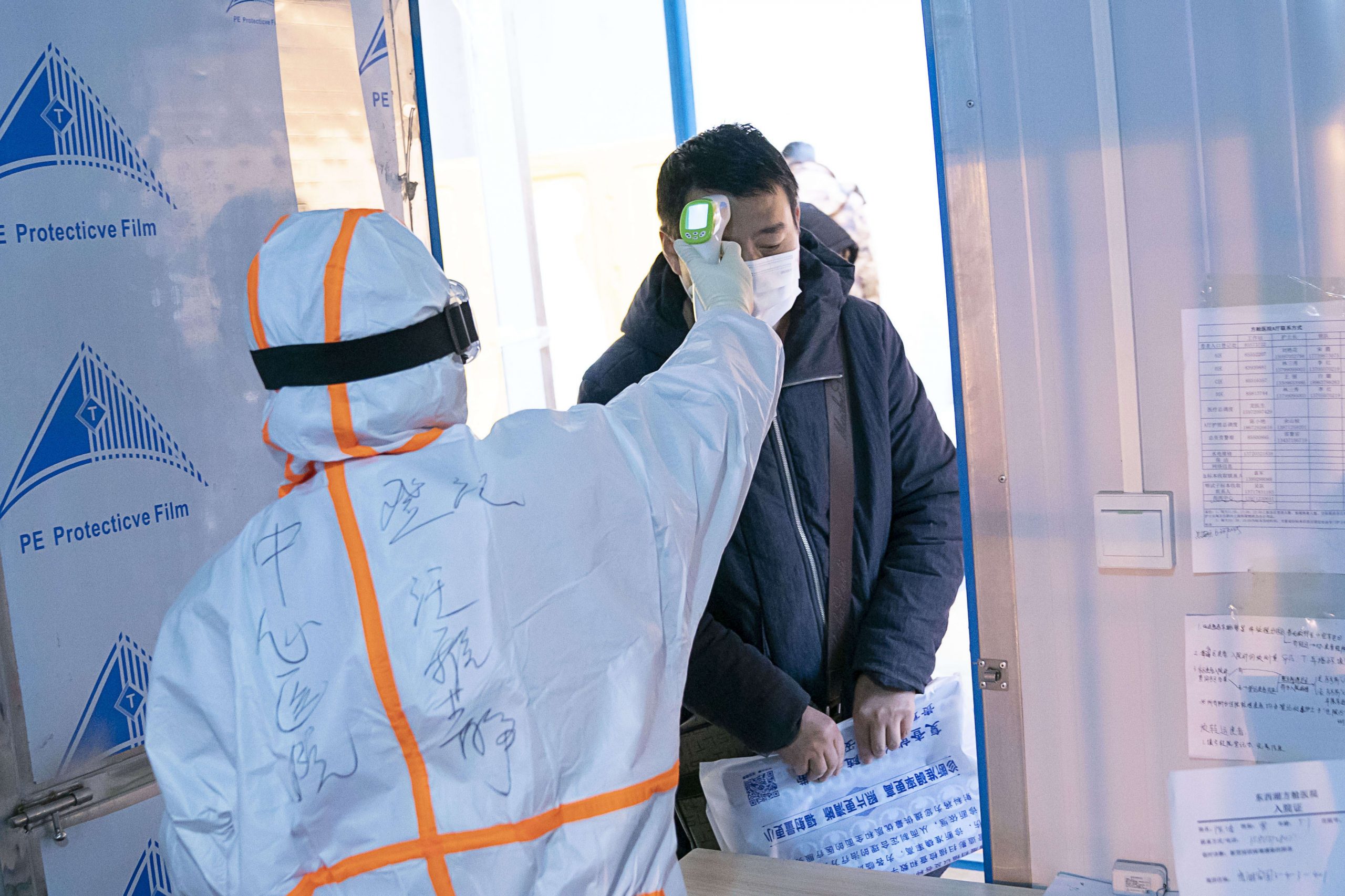 A medical staff takes temperature of a patient at a temporary hospital converted from “Wuhan Livingroom” in Wuhan, central China’s Hubei Province, Feb. 10, 2020.

China’s Hubei province said there were 115 additional deaths as of Feb. 20, which brought the total number of fatalities in the region to 2,144.

The Hubei Provincial Health Committee reported there were 411 new cases on Feb. 20, bringing the cumulative number of infections to 62,422. For the second day in a row, the number of confirmed new cases dropped significantly.

It is unclear if the steep decline is linked to a change in diagnosis protocol. What was previously termed “clinically diagnosed,” or those confirmed through CT scans and symptoms, will now fall under the “suspected” category. They will no longer be counted as “confirmed” cases like they were in the previous diagnosis protocol.

The virus, first detected in Hubei capital Wuhan, has killed more than 2,000 people so far — about 10 people outside the mainland have died. — Roy Choudhury

7:20 am: Amazon tells sellers it will take down listings for products that claim to kill coronavirus

Amazon is removing listings from its online marketplace that claim to help stop the spread of the coronavirus. The company notified third-party merchants this week that it was taking down listings claiming to be a treatment, cure or remedy for the coronavirus, according to an email obtained by CNBC.

Last week, CNBC reported that Amazon was one of several tech giants that met with the World Health Organization at Facebook’s Menlo Park, Calif. offices to discuss how to stop misinformation about the coronavirus on their platforms. Bad actors have attempted to make money off of fears around the coronavirus. On Amazon, sellers have offered books that stoke fears about the virus, while vitamin C products have increasingly surfaced because of false reports it can cure the coronavirus. — Palmer

7:05 am: South Korea’s confirmed cases balloon, with 22 additional ones reported

The total number of confirmed cases in South Korea is now 104 after 22 new patients were confirmed to have caught the infection, according to the Korea Centers for Disease Control & Prevention. That makes South Korea one of the worst affected places outside mainland China, where more than 70,000 people have been infected sp far. Most of the new cases in South Korea were identified in the city of Daegu and the surrounding Gyeongbuk province. One person is also said to have died from the illness. — Roy Choudhury

Facebook is pulling out of next month’s Game Developers Conference in San Francisco due to on-going concerns with the coronavirus outbreak. “GDC is always a highlight of our gaming event lineup, however the health of our employees and the wider games community comes before anything else,” the company said in a blog post. “Due to the evolving health concerns surrounding COVID-19, Facebook’s AR/VR and Gaming teams will not be attending GDC this year.”

Facebook typically uses the Game Developers Conference each year to make announcements for its Oculus virtual reality division and its other endeavors in gaming. A company spokesman said Facebook will still make its planned announcements, but it will do so in a digital format. — Rodriguez

Chinese banks may face increasing pressure from a rise in bad loans, according to a new report from S&P Global Ratings. The coronavirus epidemic could nearly double the number of questionable loans on the books of Chinese banks. The Chinese government has much of the country under lockdown to try to contain the outbreak, pressuring the finances of companies and consumers alike. Most of that economic impact will likely be felt in the first quarter of this year, the report said, with a recovery firmly in place by the third quarter.

Based on that slowdown, S&P Global estimates that the share of questionable loans could rise from 6.5% to 7.5% of all loans before the outbreak to a peak of about 10.5% to 11.5% in the aftermath of the epidemic. The rise in bad loans comes as Chinese bank regulators have been working to tighten accounting standards. S&P Global analysts said the coronavirus crisis will likely slow those reforms, as authorities focus instead on financial and social stability. — Schoen

Read CNBC’s coverage from the U.S. overnight: Global air travel set for first decline since 2009, FBI stocks up on hand sanitizer and masks