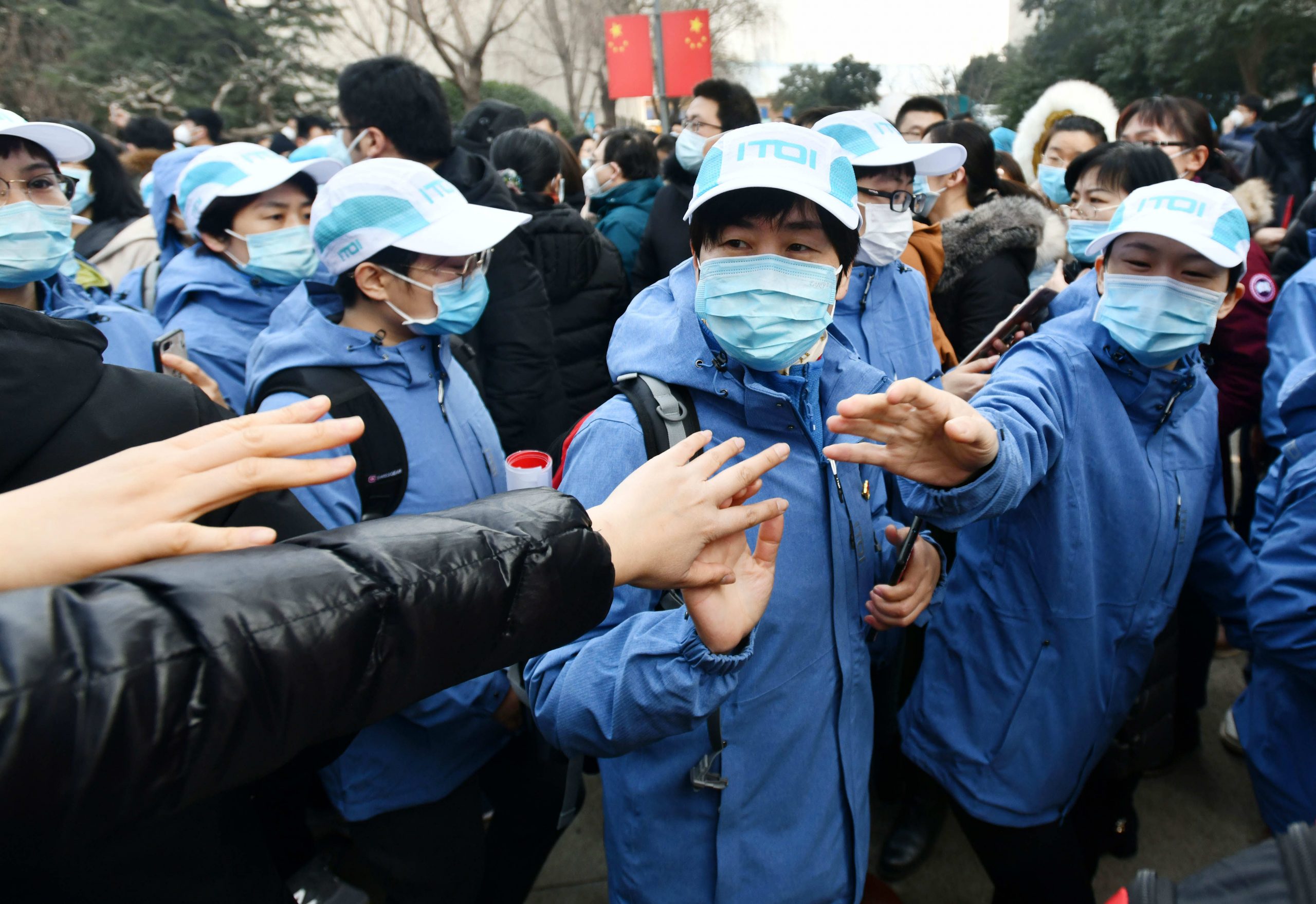 The coronavirus outbreak has caused the cancellation or postponement of more than 24 exhibitions and conferences worldwide, hammering the $2.5 trillion trade show industry and foreshadowing more pain to come.

Since the COVID-19 virus emerged in China in late December, U.S. airlines have cut service to much of China and Hong Kong, resulting in dozens of trade exhibitions and conferences being canceled or postponed. Corporations have pulled their executives from attending conferences across the globe, including major trade shows in the U.S., amid fears of a possible pandemic.

The fast-spreading virus has infected more than 76,000 people — up from 282 cases as of Jan. 20 — and spread from four countries to more than two dozen in that time frame.

Organizers of the Mobile World Congress (MWC), the world’s largest trade show for the mobile phone industry, on Monday pulled the plug on the show less than two weeks before it was set to start in Barcelona. The cancellation marked a turning point for companies who fear the possibility of exposing their workers to the deadly new virus that’s killed more than 2,100 in China over the last seven weeks.

Last week, Facebook canceled its annual Global Marketing Summit scheduled for March 9 to March 12 in San Francisco “out of an abundance of caution” over the virus. The event was expected to attract more than 4,000 participants. On Thursday, the social media company said it was also pulling out of next month’s Game Developers Conference in San Francisco.

The Beijing Auto Show, originally scheduled for late April, was postponed earlier this week to prevent the disease’s spread, according to the event’s website.

Shanghai Fashion Week, which was scheduled for March 26 to April 2 and features more than 1,200 fashion brands, was postponed last week on concerns about coronavirus, according to the event’s organizers.

The Food&HotelAsia-Hotel Restaurant and Cafe expo, referred to as FHA-HoReCa, in Singapore has been moved from March to July. The event was postponed because of the outbreak, wrote Martyn Cox, the event’s director, in an email to CNBC.

The expo’s sister event, FHA-Food & Beverage, was initially still scheduled for the end of March in Singapore. Its organizers planned to offer masks and hand sanitizer on-site to attendees. The expo was eventually canceled on Feb. 14.

GSMA, the organizers of MWC — which typically draws 100,000 visitors from all over the world — announced the cancellation after exhibitors and speakers began canceling their travel plans en masse. The four-day conference was to feature keynote speakers from AT&T, Airbus, Google, and other titans of industry.

“With due regard to the safe and healthy environment in Barcelona and the host country today, the GSMA has canceled MWC Barcelona 2020 because the global concern regarding the coronavirus outbreak, travel concern and other circumstances, make it impossible for the GSMA to hold the event,” GSMA said in a statement.

LG Electronics, Amazon, Ericsson, Cisco, Facebook, AT&T, Sony, Nvidia, and other companies pulled out of the MWC prior to the cancellation.

The event is usually a major “coming-out party” for the year’s new products on a global scale, according to Lee. Now, LG will focus on doing product announcements at the regional level.

Amazon also canceled its attendance at MWC because of concerns about the virus, a spokesperson for Amazon Web Services told CNBC. Ericsson had similar fears.

“Over the last couple of weeks, we have followed instructions and recommendations from authorities in different countries,” said Mikaela Idermark, corporate communications manager at Ericsson, in a statement to CNBC. “After an extensive internal risk assessment, we concluded that this is the most responsible decision.”

The cancellation of trade events around the world is having damaging ripple effects across the hotel, airline, entertainment, marketing, restaurant, and other industries.

“We will not know the economic impact until later this year, but it is substantial,” said Cathy Breden, CEO of the Center for Exhibition Industry Research.

The global business events industry generated $2.5 trillion worth of business sales in 2017, according to the latest research from the Events Industry Council and Oxford Economics. It also contributed $1.5 trillion to global GDP and employed 26 million people worldwide in 2017.

China, in particular, is an important hub for trade events, and the exhibition industry is an “economic engine” for the country, according to Breden. With more than 76,000 cases of the virus and over 2,200 deaths, however, event organizers say postponing or canceling conferences is absolutely necessary. Some convention centers have even been converted into temporary hospitals.

Marine Money Shanghai, a conference for shipping financiers, was planned for March 3 and 4, but was postponed because of the virus’ growing severity and concerns from attendees.

“First in our minds was and will always be the health and safety not only of our community, friends and clients, but of everyone engaged in resolving the current challenge,” Andrew Oates, business development manager for Marine Money Asia, wrote in an email to CNBC.

Rescheduling events can pose serious financial issues for organizers, according to Breden. They may not be able to book the same venue for their preferred date and can lose money they’ve spent on the event space and other services like catering and conference management.

Exhibitors and attendees also face challenges when events are canceled or when they choose not to attend, such as eating the costs of booth deposits, event registration, and travel arrangements.

Most importantly, they miss the opportunity of making potentially lucrative business connections, according to Sherrif Karamat, president and CEO of the Professional Convention Management Association.

“There’s a tremendous amount of commerce that happens when we meet face to face that can’t happen online,” said Karamat.

The coronavirus outbreak isn’t scaring off all event planners, however.

The aerospace and defense show instituted safety measures such as a “no-contact policy” for attendees. The event’s official Twitter account posted a video showing its lion mascots demonstrating “alternative greetings” like bows and hand waves.

“The Singapore Airshow organizers are doing a good job of working with experts, following all prescribed protocols and thoroughly communicating the best guidance to minimize the risk,” said Chris Meyer, director of marketing and communications at Kallman Worldwide, which organizes the U.S. presence at the event.

At the UFI CEO Summit in Rome earlier this month, business leaders in the events industry were concerned about the impact of the virus on future trade shows and conferences, according to attendee David Audrian, executive director of the Society of Independent Show Organizers.

“They’re basically assuming all shows through March will be canceled [in China],” Audrian said.

Business leaders are also fearful of traveling to shows that have high Chinese participation and are considering not going to them even if they are in the U.S. or Europe, Audrian added.

“This will start to impact a significant number of shows that have Chinese exhibitors or Chinese attendees,” he said.

U.S. exhibitions are already seeing lower numbers of participants from China. At Sourcing@MAGIC, an apparel manufacturing trade show that took place in Las Vegas earlier this month, only half of the Chinese vendors were able to attend because of the U.S. travel ban on foreign nationals who had recently been in China, according to Tom Nastos, chief commercial officer for Informa Markets, the show’s organizer.

“The other 50% were already in the country or other countries prior to the travel ban,” Nastos said.

American companies have also been hesitant to attend domestic trade events because of the outbreak. Sony PlayStation canceled its participation at PAX East 2020, a major video games convention scheduled Feb. 27 to March 1 in Boston, where there has been a confirmed case of the virus.

“We are disappointed to cancel our participation in this event, but the health and safety of our global workforce is our highest concern,” PlayStation said in an announcement posted on its website. The company declined to comment further on the matter to CNBC.

The convention’s organizers were saddened by Sony’s decision to pull out of PAX East 2020, according to the event’s director, Kyle Marsden-Kish.

Marsden-Kish said PAX East 2020 will still go on, but with “enhanced cleaning and sanitization across the show, including adhering to the recommendations set forth in the U.S. EPA’s Emerging Pathogen Policy regarding cleaning disinfectants effective against the COVID-19 virus.”

The U.S. events industry has been sharing information and using its experience with past crises to manage the outbreak, said Amy Calvert, CEO of the Events Industry Council. People feel more prepared today than they did with the SARS epidemic, she added.

“We want to try and remain calm,” she said. “It’s important to come from an informed place rather than one of fear.”

CNBC’s Noah Higgins-Dunn and William Feuer contributed to this article.