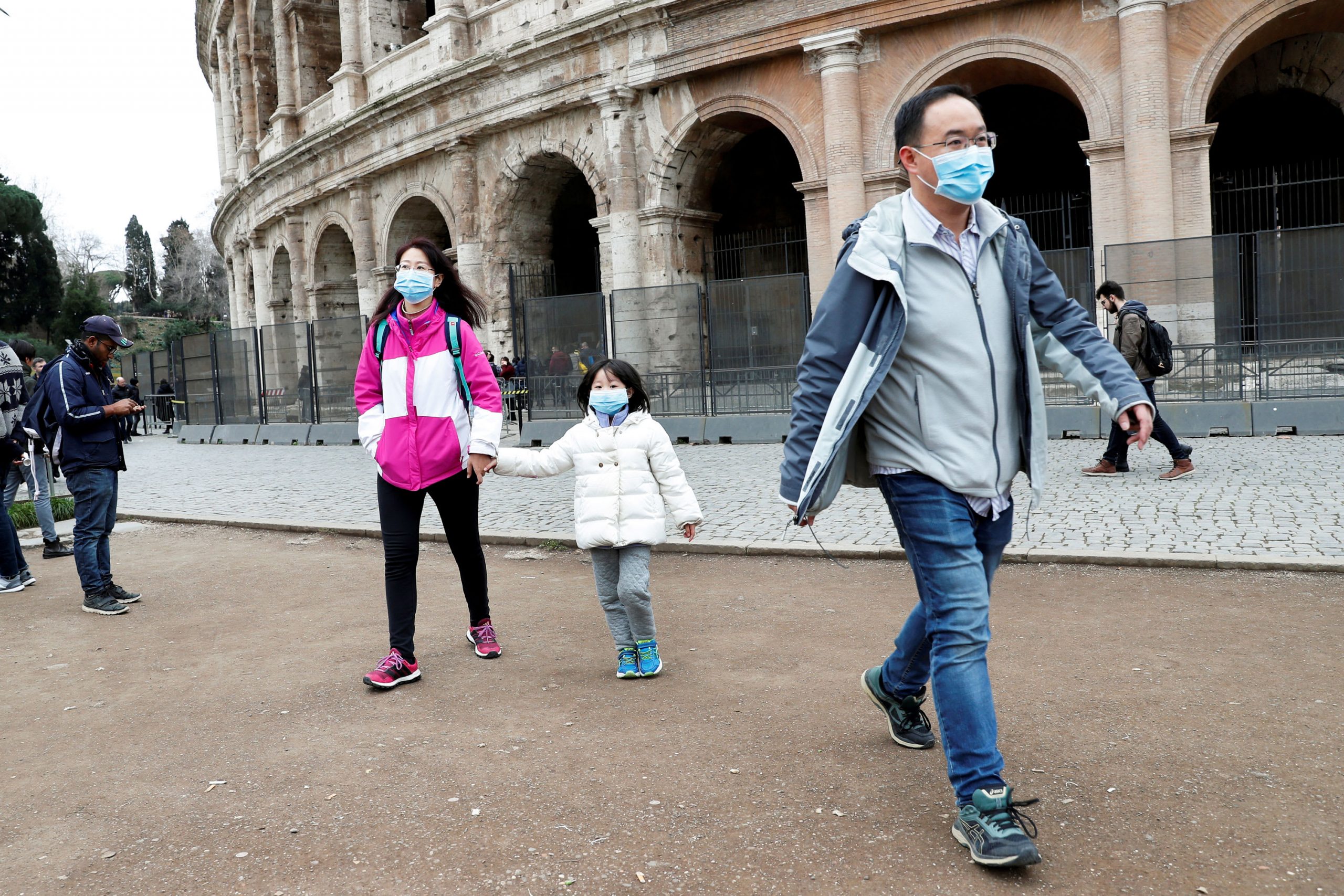 Tourists wearing protective masks walk past the Colosseum, after two cases of coronavirus were confirmed in Italy, in Rome, January 31, 2020.

Localized outbreaks of the new coronavirus outside of China are fueling concerns among infectious disease experts and scientists that the virus is spreading too quickly and may be past the point of containment. Health officials are warning the public to prepare for a potential global pandemic.

Iran health officials said Friday the COVID-19 coronavirus had spread to several cities, confirming 13 new cases and bringing its total in the country to 18 in just a matter of days. Hours later, Italy announced its outbreak had worsened, confirming 14 cases in the region of Lombardy and two cases in the adjacent region of Veneto.

Outside of China, there are now 1,152 cases across 26 countries — up from 505 cases across 24 countries a week ago — and eight deaths as of Friday, according to the World Health Organization.

The number of new cases was unprecedented just a month ago when there were as little as 300 COVID-19 cases worldwide, mainly in China. Experts are beginning to wonder: Is the genie out of the bottle?

“Over the last few weeks, many in the medical and public health communities wondered how much transmission is ongoing outside of China that we’re just not aware of,” Isaac Bogoch, an infectious disease specialist and professor at the University of Toronto, said in a phone interview with CNBC.

“The concern is that there may be significant numbers of undetected and unreported cases in Iran. And that this may be another potential global focus for disease exportation,” he said.

Bogoch said the detection of the coronavirus in a Canadian woman who recently traveled to Iran was particularly concerning.

The virus appears to stabilize in China

The outbreak looked like it was going in a different direction just a week ago.

WHO officials said on Feb. 12 that the number of new cases in China appeared to have stabilized and that officials had “a good view on the virus” overall.

Daily reports from Chinese health officials showed new cases in the country were declining. On Feb. 14, WHO reported 505 cases in two dozen countries outside of China but said there were no signs anywhere beyond China of community transmission, which is when officials cannot identify the source of the virus.

Nearly all the cases outside of China were traced to people who had traveled through the epicenter of the outbreak. Only 107 cases were spread from one person to another outside of China, but many of those cases were people with a close relationship to a traveler who had carried the virus from China.

China was taking drastic measures at that point to contain the virus, and WHO officials said new cases in China appeared to slow.

The cases take a turn

Developments since then paint a bleaker picture.

Cases outside of China have now doubled, to over 1,200, with more than 350 cases of transmission occurring outside of China. Cases in South Korea have spiked from 28 a week ago to 204 as of Friday, leading the southern city of Daegu, where many of the cases are centered, to ban mass gatherings and encourage self-quarantine.

“It’s possible that it exists in all cities in Iran,” health ministry official Minou Mohrez said.

Tedros Adhanom Ghebreyesus, director-general of WHO, said Friday that the sudden outbreak in Iran and other parts of the world is “very worrisome.” He said there is still a chance for health officials to contain the virus, but it’s getting less likely by the day.

Health officials are receiving information about the patients in Iran, but “we have to engage them even more,” Tedros said.

Infectious disease experts say the virus may be entering a new phase with cases spreading outside of China.

Yanzhong Huang, a public health researcher at the Council on Foreign Relations and director of the Center for Global Health Studies at Seton Hall University, said his biggest concern is whether countries such as Iran have the health-care infrastructure to detect and contain the virus.

Dr. Jaouad Mahjour, assistant director of emergency preparedness at WHO, said Friday that Iran’s health-care system has the “basic capacity” to detect and contain the coronavirus.

Health officials said they remain concerned about the potential spread of the virus to countries with weaker health systems.

Dr. Scott Gottlieb, the former commissioner of the U.S. Food and Drug Administration, said he believes we’re right about at the pandemic state.

WHO “will be slow to make that call, but it’s kind of there whether they say it this week or next,” he said.

U.S. health officials said Friday that they are preparing for the coronavirus to become a pandemic.

“We’re not seeing community spread here in the United States, yet, but it’s very possible, even likely, that it may eventually happen,” Dr. Nancy Messonnier, director of the CDC’s National Center for Immunization and Respiratory Diseases, told reporters on a conference call. “Our goal continues to be slowing the introduction of the virus into the U.S. This buys us more time to prepare communities for more cases and possibly sustained spread.”

Messonnier pointed to China, where schools and businesses have been shuttered for weeks to contain the outbreak there, saying the U.S. may eventually need to do the same.

“The day may come where we may need to implement such measures in this country,” she said.