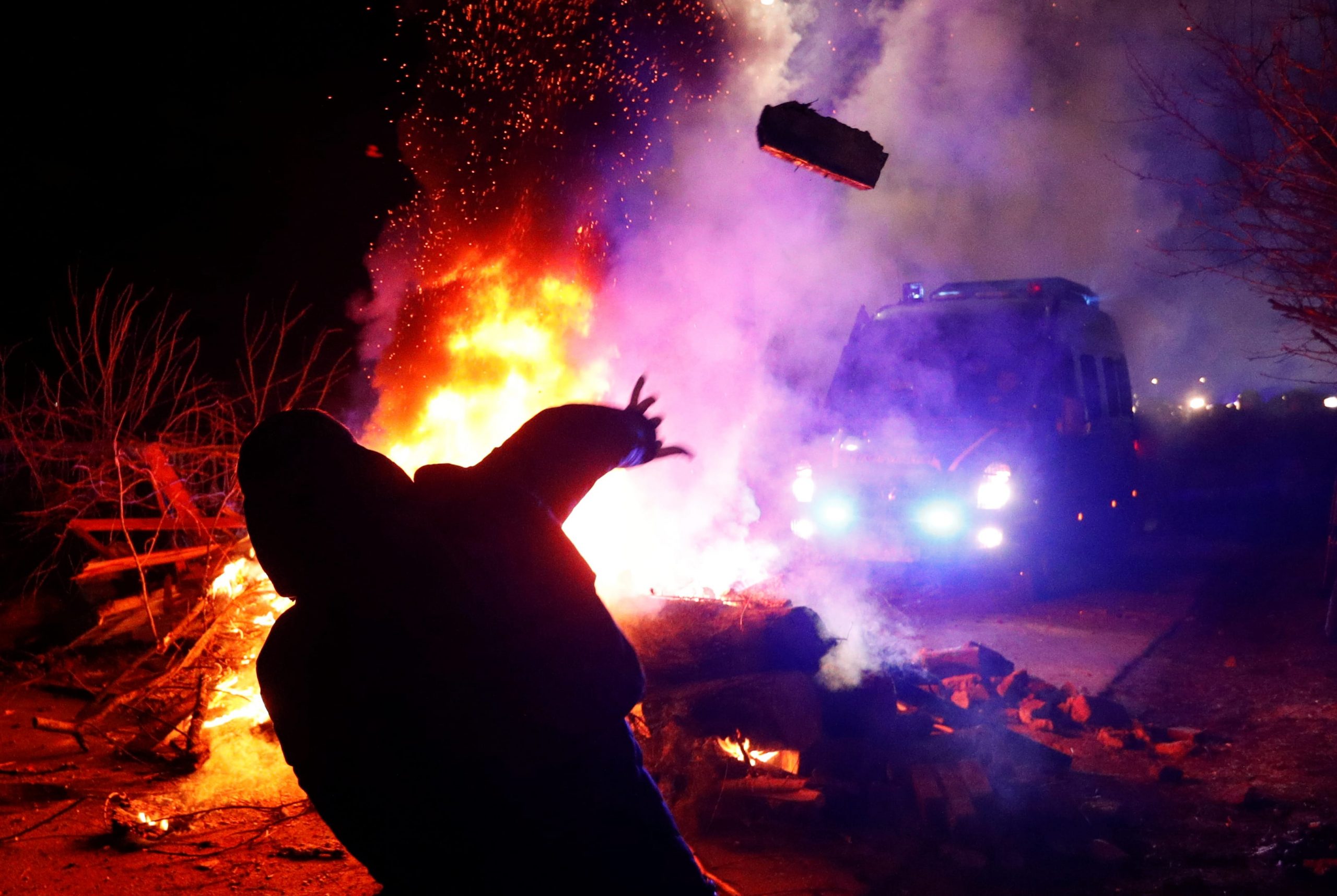 A demonstrator throws a stone towards a police van during a protest against the arrival of a plane carrying evacuees from coronavirus-hit China’s Hubei province in the village of Novi Sanzhary in Poltava region, Ukraine February 20, 2020. Local residents blocked the road leading to a sanatorium where the evacuees are due to be held in quarantine for at least two weeks.

A combination of online misinformation and intensifying fears about the coronavirus has triggered violent demonstrations in Ukraine, where protesters threw stones at buses carrying evacuees from China.

On Thursday, six buses carrying 45 Ukrainians and 27 foreign nationals were brought to a hospital in Novi Sanzhary, a town southeast of the capital city of Kyiv.

Dozens of protesters sought to block the route of the buses, hurling stones at the convoy while engaging in violent clashes with the police.

The vehicles were eventually able to reach their destination after a tense stand-off, albeit hours later than scheduled.

All of the evacuees will spend the next two weeks in quarantine.

The country’s health minister has said that none of the passengers on board the buses were thought to be unwell.

Demonstrators line up in front of Ukrainian law enforcement officers in the village of Novi Sanzhary in Poltava region, Ukraine February 20, 2020.

Ukrainian President Volodymyr Zelenskiy has called for calm, urging citizens to show empathy to the evacuees.

“I sympathize with our evacuees, because I already know what it is to be under personal protection, and in them the protection will be much more serious than that of the President,” Zelenskiy said in a statement posted on Facebook on Thursday.

“But there is another danger that I would like to say. The danger of forgetting that we are all human and we are all Ukrainian. Each of us. Including those who ended up in Wuhan during the epidemic.”

The chaos came shortly after a disputed email purporting to be from Ukraine’s health ministry was sent on the same day evacuees arrived from Wuhan, China, — the epicenter of the coronavirus outbreak.

The email had spread false information that five people in the country had contracted the deadly flu-like virus.

Ukraine has no confirmed cases of the coronavirus inside the country. Only two Ukrainian nationals aboard the Diamond Princess cruise ship quarantined in Japan were reported to have contracted the virus, and both have since recovered.

The Security Service of Ukraine said in a statement published Thursday that the email, which was distributed to the health ministry’s entire contact list, originated from outside Ukraine.

Ukrainian law enforcement officers and firefighters clear the way as demonstrators block a road in the village of Novi Sanzhary in Poltava region, Ukraine February 20, 2020.

China’s National Health Commission reported Friday that 75,465 cases of the coronavirus had been confirmed, with 2,236 deaths nationwide.

In an effort to show solidarity to the evacuees, Ukraine’s health minister has said she will join those in quarantine.

“With them, I will spend the next 14 days in the same room in the same conditions. I hope that my presence will reassure both those who are in New Sanjar and the rest of the country,” Zoryana Skaletska, Ukrainian health minister, said in a Facebook post on Thursday.